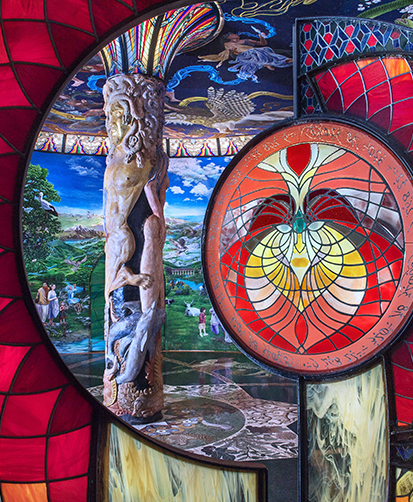 THE HALL OF VICTORY

This Hall is located in the deepest point of the Temple compound. The ceiling reproduces the sky and constellations of 22,000 years ago, at the exact latitude of the Temples, to remind us of the time when the civilization of Atlantis was flourishing. 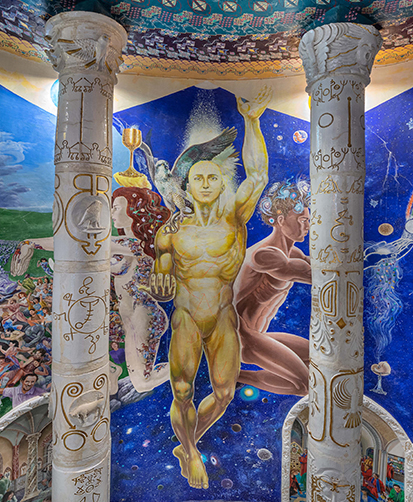 THE HALL OF THE EARTH

Eight columns made of white ceramic and richly decorated with high and low reliefs, adorn this Hall that narrates the complex story of the unitary divine principle fragmenting itself and creating life in the universe. 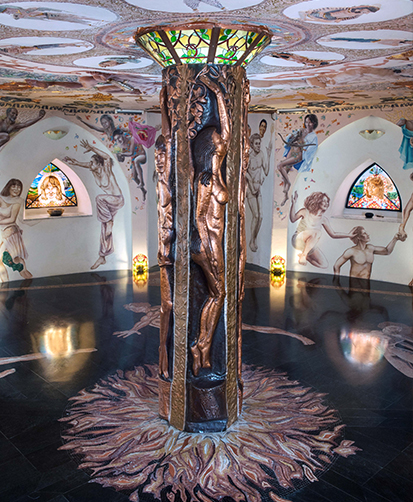 THE HALL OF METALS

Spiritual evolution by overcoming of our human limitations is the theme of this spacious, circular Hall. The design of the floor mosaic is continued by the images depicted on the walls to finally reach the terracotta ceiling. 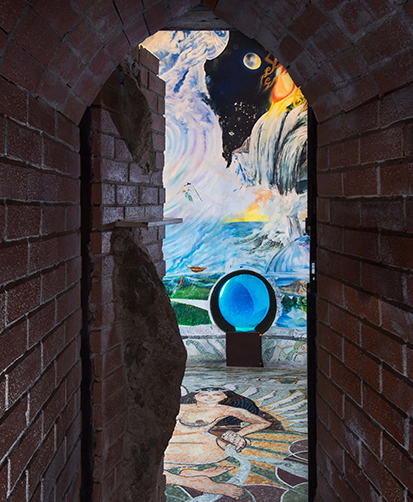 This Hall, excavated inside the mountain in 1978 using pickaxes and chisels, represents the beginning of the great enterprise of the Temples, undertaken by a small group of individuals whose vision has inspired thousands of people around the world. 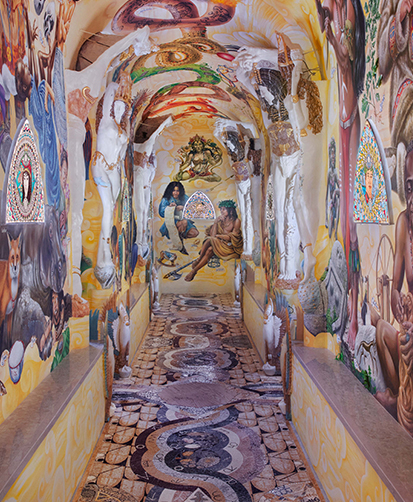 An elegant, symmetrical architectural style and intersecting corridors give the impression of walking in a richly adorned labyrinth showing an elaborate pictorial representation of hundreds of divine forces connected to the peoples of the planet. 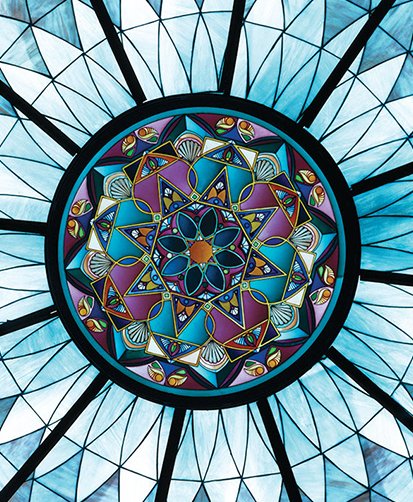 THE HALL OF WATER

This unique Hall has signs and symbols from twelve ancient alphabets painted on its walls. As testimonials, they perpetuate ancestral memories and knowledge, meanwhile four golden snakes indicate the points where the Synchronic Lines come to the surface. 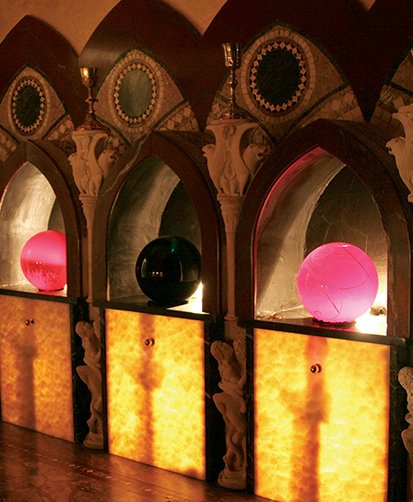 THE HALL OF SPHERES

The Hall of Spheres is placed at the intersection of four Synchronic Lines, the great energy flows surrounding our planet.
Here, it is possible to send and receive messages that are valuable for the evolution of humankind. 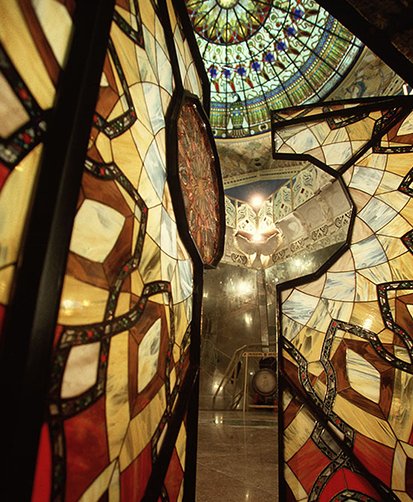 THE HALL OF MIRRORS

Immersed in a magic atmosphere and in a golden light diffused by the dome, visitors feel enchanted by the endless reflections produced by the wall mirrors that surround everything in this Hall, and by the sound of the gong.

WHY THESE TEMPLES
WERE BUILT

WHY THESE TEMPLES WHERE BUILT

All worlds where life exists are connected through cosmic channels of communication. In Damanhur, we call them Synchronic Lines: flows of information and energy that around the Earth form a grid and support vibrationally the evolution of souls, peoples and planets.

Throughout the history of humanity, antennas to receive the information coming from the Synchronic Lines have been built: sacred sites, pyramids, temples and cathedrals in all continents are located along these special energy lines.

The Temples of Humankind are one of these antennas.

Many spiritual sites all over the earth have kept the connection with the Forces of evolution throughout the millennia. Magical and spiritual architecture is based on codes, symbols and structural elements that receive information coming from the Synchronic Lines and spread them across the planet. Monks, druids, shamans, priests and priestesses with the proper knowledge, training and initiation are the technicians holding the keys to keep the flow open for the benefit of all humanity.

Directions of building the Temples of Humankind were given to Falco — the Founder and Spiritual Guide of Damanhur —in 1978. Falco was 28 and had been preparing for this task since childhood, recovering his memories and ancient knowledge.

It had become apparent that a new antenna was necessary, to support those already existing. The area were the Temples had to be built has the same characteristics of Tibet: points of crossing of four Synchronic Lines. This Shining Knot in Valchiusella was not well-known and could be the ideal place to start a new line of events, the seed for a new future. Also, through a time prospections, it was established that the area would be geologically, climatically and socially stable for a long time to come. The new Sacred Antenna could play its role way ahead into the future.

This is why the Temples were built. And why they were built in Valchiusella.

A TEMPLE IN THE OPEN AIR 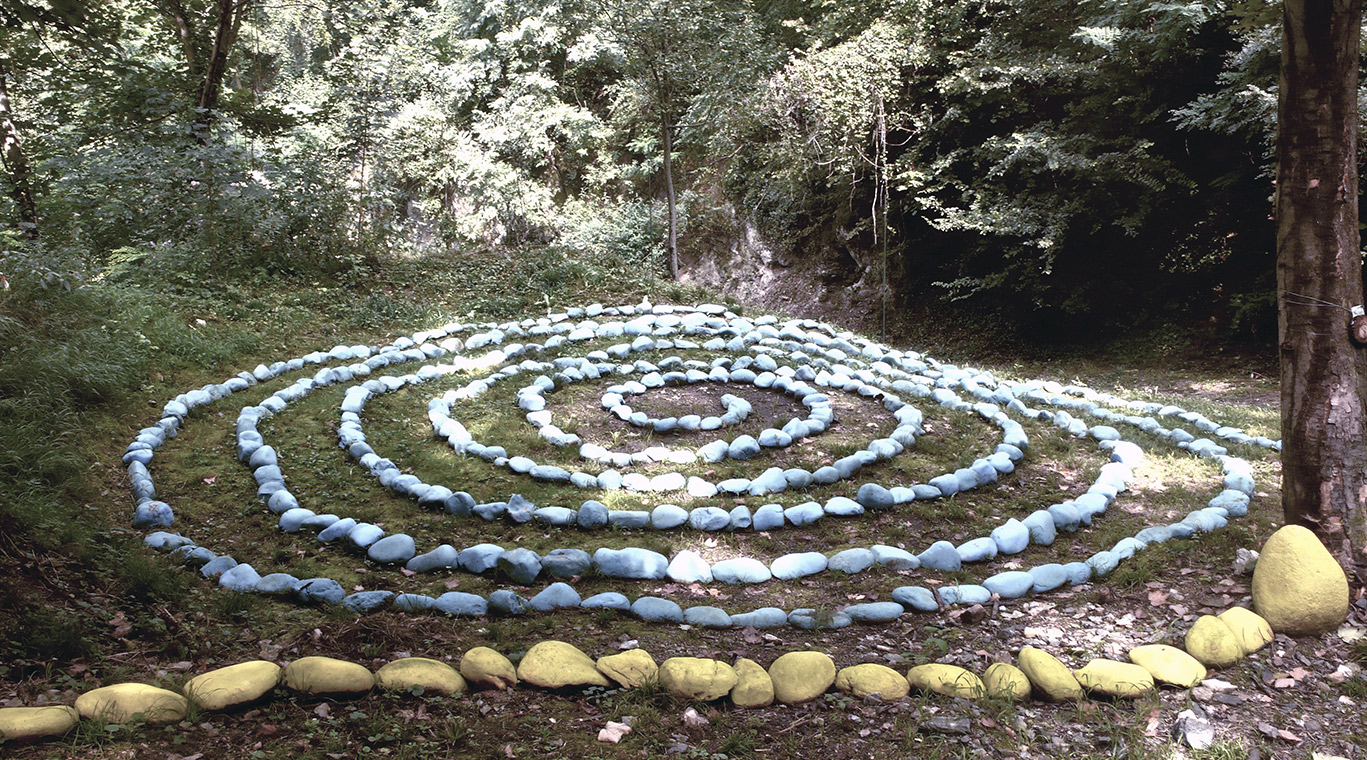 The Temples of Humankind are a part of a living system of sacred spaces. They breath and connect to the energies of the Earth and the cosmos also through the trees of the hill inside of which they have been built.

With love and dedication, through many years of work we have brought the once exploited and almost dead woods of this area back to life, healing the trees, so that the butterflies, the birds and the wildlife could come back.

Only the respect and the integration of all life can turn a land into a truly sacred territory, in which the energetic and spiritual ecosystem creates a special “bubble” of peace. 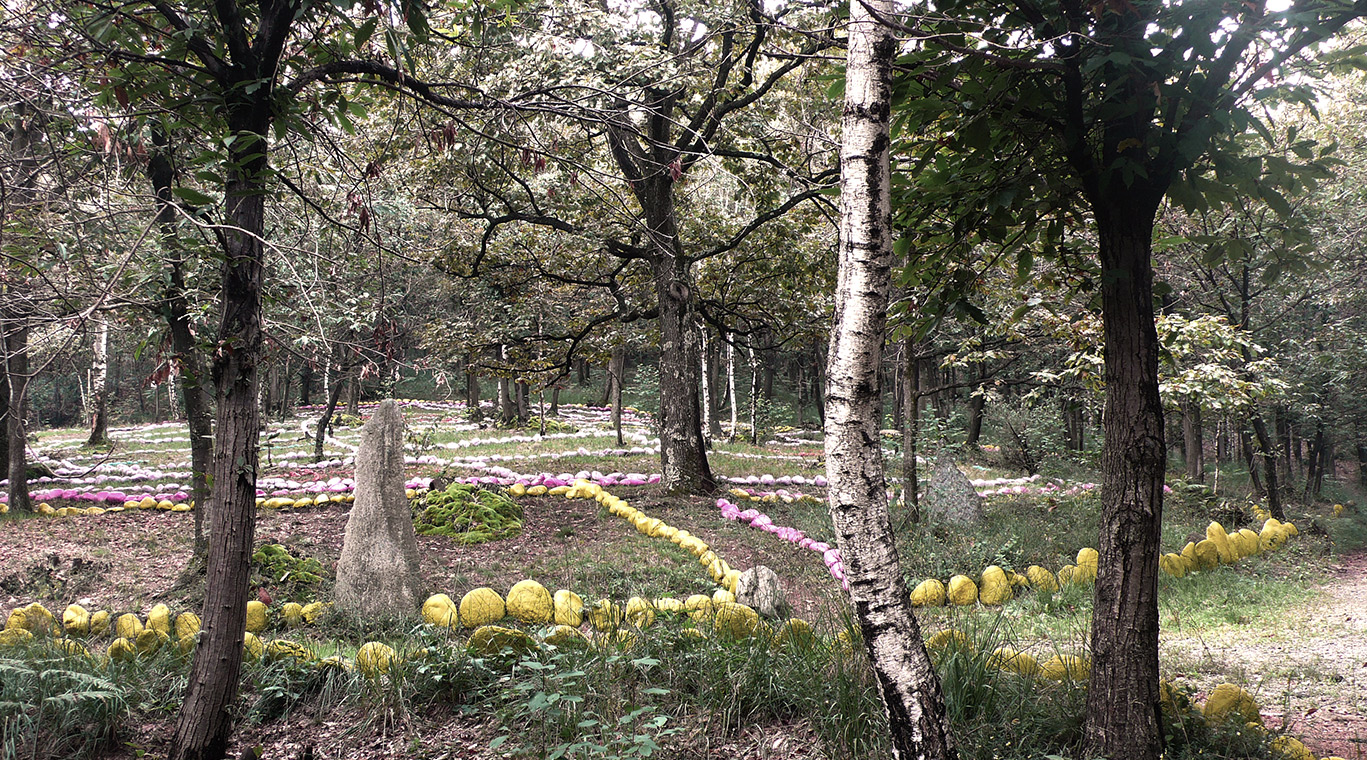 The Sacred Woods of Damanhur are a laboratory where human beings can evolve and honor the sacredness of Trees, to connect with their collective consciousness, and through them, recreate a balanced relationship also with all the subtle forces of Nature.

In this context it is easy to get in touch with our deepest senses, those of the soul, to find answers outside the usual schemes to let new sensations, intuitions and talents emerge and be translated into poetry, beauty, music… 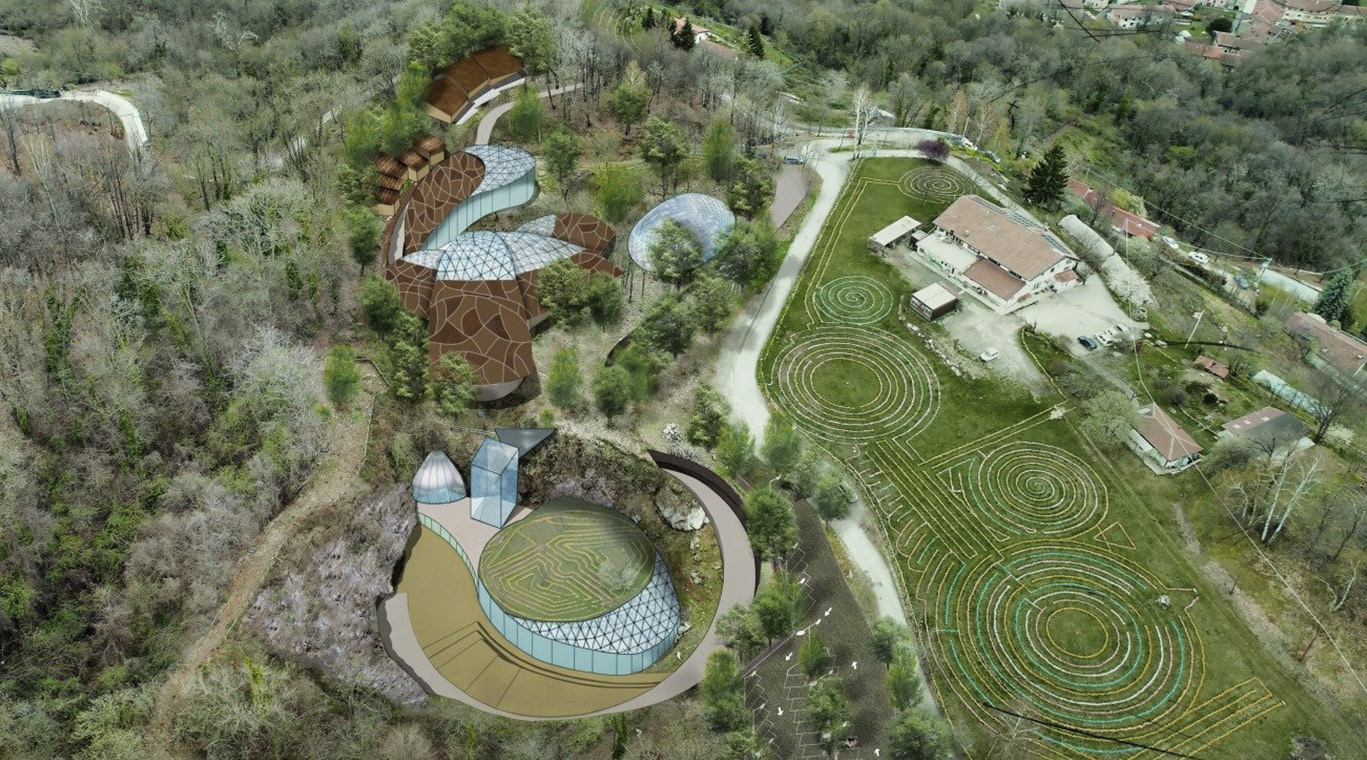 For several years now, in a beautiful Crystal Spiral, the Sacred Woods have been hosting ceremonies of shamans from all the traditions of the world.

The ordered atomic structure of the crystals functions as a collector and memory tank, where the representatives of the peoples can “deposit” a copy of their knowledge.

In this way it can be preserved and spread throughout the world thanks to the energies of the Synchronic Lines, of which the Temples are a point of access and collection. In this way, Damanhur helps them to affirm their existence and give strength to the spiritual values of their people. 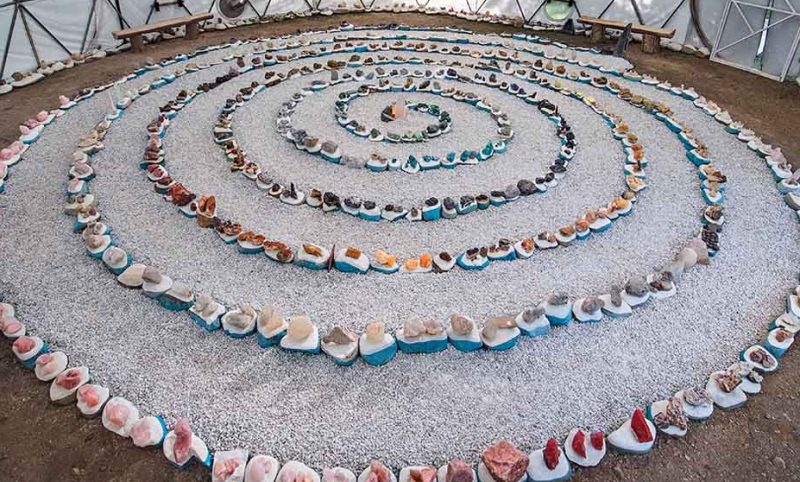 The Crystal Spiral is the first step towards the creation of the Temple of Concordance, with the Parliament of Indigenous Peoples at its heart, dedicated to preserving and spreading the knowledge and spirituality of native peoples. In the Temple of Concordance, representatives of indigenous peoples will be able to meet with each other, with leaders of thought and agents of social transformation, so that their ancient wisdom can contribute to solving some of the challenges of our future.

The Temples of Humankind, the Sacred Woods and the Crystal Spiral are three integrated aspects of a single, great Spiritual Structure, which will be complete with the Temple of Concordance.  A collective work in harmony with the values of all Peoples, cultures and traditions to open the way to a faster, more harmonious and conscious human evolution.

THE MAGIC OF THE TEMPLES 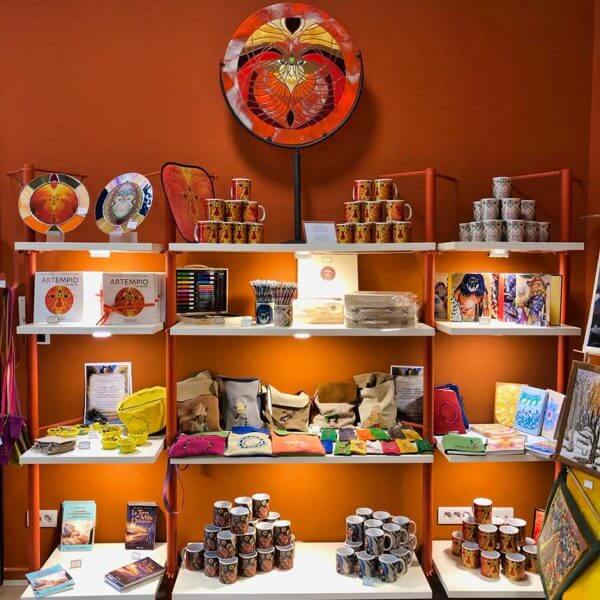 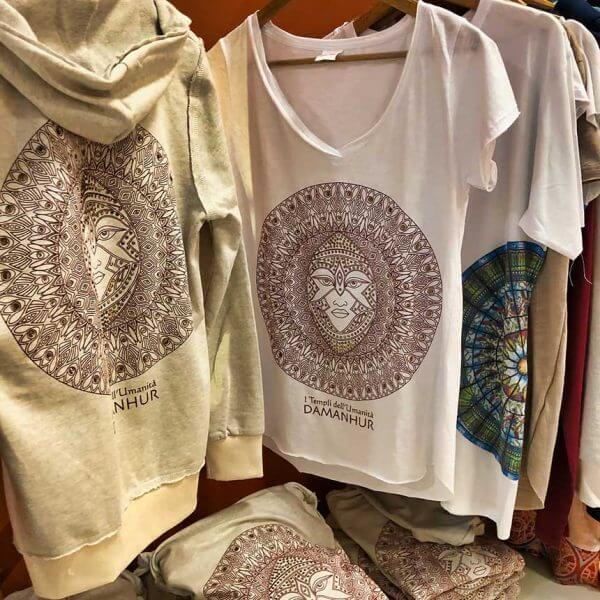 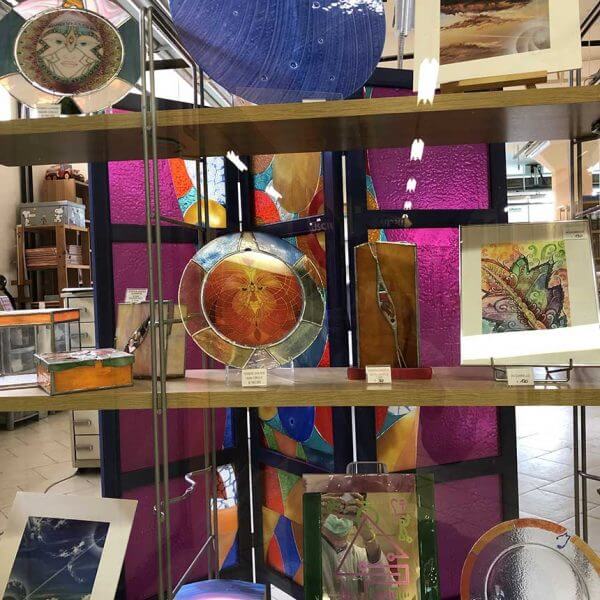 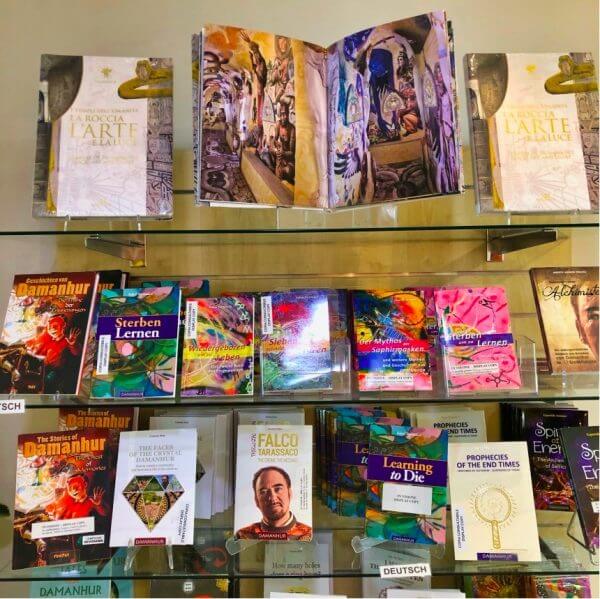 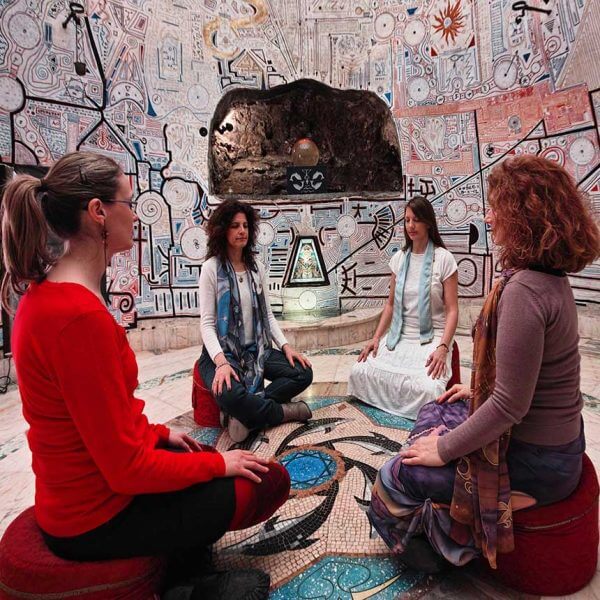 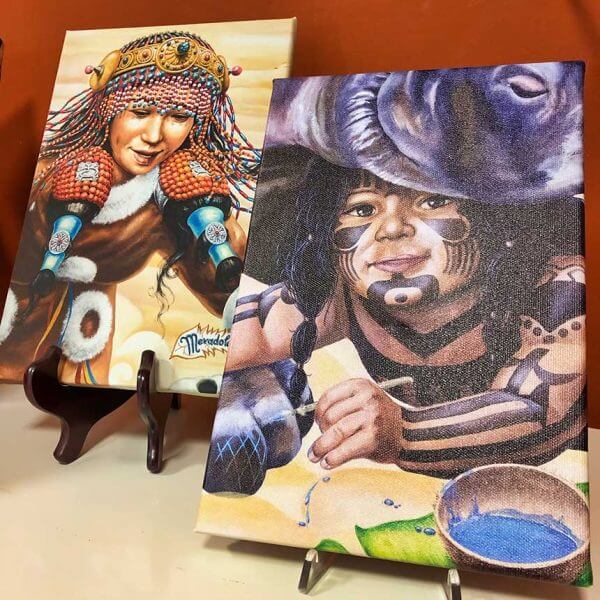 Stay connected through our newsletter!

This website uses cookies to improve your experience while you navigate through the website. Out of these cookies, the cookies that are categorized as necessary are stored on your browser as they are essential for the working of basic functionalities of the website. We also use third-party cookies that help us analyze and understand how you use this website. These cookies will be stored in your browser only with your consent. You also have the option to opt-out of these cookies. But opting out of some of these cookies may have an effect on your browsing experience.
Necessary Always Enabled
Necessary cookies are absolutely essential for the website to function properly. This category only includes cookies that ensures basic functionalities and security features of the website. These cookies do not store any personal information.
Non-necessary
Any cookies that may not be particularly necessary for the website to function and is used specifically to collect user personal data via analytics, ads, other embedded contents are termed as non-necessary cookies. It is mandatory to procure user consent prior to running these cookies on your website.
SAVE & ACCEPT
Shopping cart
There are no products in the cart!
Continue shopping
0